The BC14 Insect Lamp, harmless to humans and pets:

Spring and summer are wonderful seasons to relax and enjoy the beautiful weather. We open windows and doors to let the sun in. But often uninvited guests enter the house such as mosquitoes, flies and wasps. This insect lamp effectively eliminates all those flying visitors. We have equipped the lamp with a blue UV light which attracts insects. The insect lamp’s low-noise fan sucks the insects in, after which they end up in the collection tray. This tray is easily emptied and cleaned.

The insect lamp works instantly once it’s plugged into the desired socket. Simply plug and play. The lamp is not harmful to people or pets as it does not need any chemicals to function. As a result, the lamp is also odourless. In other words: you won’t even notice the insect lamp is there, except that you are no longer bothered by insects. It’s perfect!

Not every summer has the same number of insects. Volumes strongly depend on the temperatures of the period the eggs hatch. Some summers you hardly see a wasp and other summers they seem to be everywhere. That’s when you want the insect lamp to work twenty-four hours a day, as waking up to the characteristic buzz of a mosquito is anything but pleasant. But what about the energy consumption? You’ll be pleased to know that it works on only four Watts. Nevertheless, one lamp is sufficient for rooms up to 30 m2 / 70 m3 / 323 sq. ft. It’s widely used in bedrooms, living rooms and kitchens as well as in canteens, shops and lunchrooms.

You’ll never have to chase insects with a fly swatter again. Additionally, this insect lamp meets Alecto's high-quality standard at an attractive price.

What's in the box? 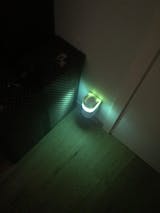